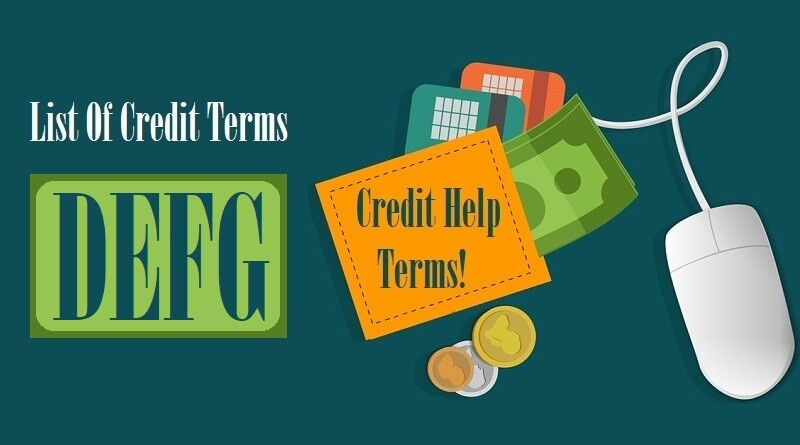 Our glossary of credit terms will help you learn the most common financial terms, words and phrases, as well as the meaning for dozens of legal and credit terminology terms alphabetically.

Debt – A specified sum of money that is legally owed from one to another.

Debt Consolidation – The act of paying off all outstanding debt with a single loan.

Debt-to-Income Ratio – The ratio, expressed as a percentage, which results when a borrower’s monthly payment obligation on long-term debts is divided by his or her gross monthly income.

Default – Failure of a debtor to make loan repayments as agreed to in a loan contract.

Delinquent / Derogatory Accounts – Accounts classified according to the time past due. Common classifications are 30, 60, 90 and 120 days past due. Can also include accounts that have been charged off, gone to collectors, liens, bankruptcies or court judgment.

Discharged – A debt that a court declares no longer needs to be repaid due to bankruptcy. Alimony, child support, liability for willful and malicious conduct, and certain student loans cannot be discharged.

Disclosure – A credit report provided to the consumer which shows the “nature or substance” of what is in his or her credit records as outlined by the FCRA (Fair Credit Reporting Act).

Dismissed – When a consumer files for bankruptcy, the judge may decide to not allow the consumer to continue with the bankruptcy. If the judge rules against the petition, all debts are reinstated and the bankruptcy petition is “dismissed”.

Disposition Fee – A charge by a car dealer to defray the cost of preparing and selling the vehicle at the end of the lease if the vehicle is not purchased by the consumer.

Down Payment – Amount paid up front when arranging credit. For leases, a down payment is often called a “capital lost reduction”.


Economic Index – Represents a consolidated average of a major economic component – such as wholesale prices, housing starts or inflation – that is used to measure economic health.

Economic Indicator – Key statistics of the economy that reveal the direction of the economy; for example, the unemployment rate and the inflation rate.

End-User – The person or company who is the ultimate recipient of information. Sometimes information passes a number of different processes before reaching the “end user”.

Equifax – One of the three credit reporting bureaus, headquartered in Atlanta, GA. The other two are Experian® and TransUnion.

Escrow – Property or money held by a third party until the agreed upon obligations of a contract are met.


Fair Credit and Charge Disclosure Act (FCCDA) – Part of the Truth In Lending Act requiring the disclosure of the costs involved in credit card plans that are offered by mail, telephone, or applications distributed to the general public.

Fair Credit Reporting Act (FCRA) – A federal law governing the actions of credit reporting agencies. Enacted by the US Congress in 1970 and amended in 1996, the FCRA protects consumer rights by limiting access to your credit report.

Federal Tax Withholding – Total amount of moneys withheld from your take-home pay for federal taxes. This amount will appear on your pay stub.

Fees – Any of a variety of charges.

FICA – The amount withheld from your paycheck for Social Security taxes. You pay half of your FICA tax; your employer pays the other half.

Finance Charge – Amount of interest charged to you by a lender. Finance charges are usually included in the monthly payment total.

Financial Aid – A monetary aid to remove the cost barriers that may prevent a person from pursuing a higher education. Assistance is available from a variety of programs funded by federal, state, university and private sources. These can include: grants, scholarships, loans, and employment opportunities.

Financial Institution – An enterprise such as a bank whose primary business and function is to collect money from the public and invest it in financial assets such as stocks, bonds, and loans to others.

Fixed Rate – An annual percentage interest rate that does not change during the term of the loan.

Flagging an Account – Identifying an account for a specific purpose or reason and temporarily suspending activity on the account until the problem that caused it to be flagged is resolved.

Foreclosure – Foreclosure refers to the lender’s legal action to take possession of the property. When a debtor fails to meet his obligations to pay back a loan, the lender can take back possession of any property (such as a building, house, etc.,) used to secure repayment for the loan.

Fraud – Usually consists of making false and misleading representations with the intention of cheating another person. Any act or practice resulting in loss of someone’s rights or property.

Free Credit Report – Free credit report is an exclusive offer by some companies which issue some facts of your personal credit history with an intention to give you paid services latter. For more, please see Credit Report.


Garnishment – Its a legal process where as a creditor has obtained judgment on a debt may obtain full or partial payment by seizure of a portion of a debtor’s assets (wages, bank account, etc.,).

Generation Identifier – An addition to someone’s name which indicates there are others in the same family with the same name. Examples: Sammy Davis, Jr., King George the III, Thomas Keating IV.

Grace Period – The period allowed to avoid any finance charges by paying off the balance in full before the due date. Moreover, the grace period is the time between the statement date and the payment due date and is determined by the credit card issuer. The grace period usually varies between 15 and 26 days and is part of the interest-free period. The grace period may not apply unless you meet certain conditions.

Guarantor – The person ultimately responsible for paying a bill.