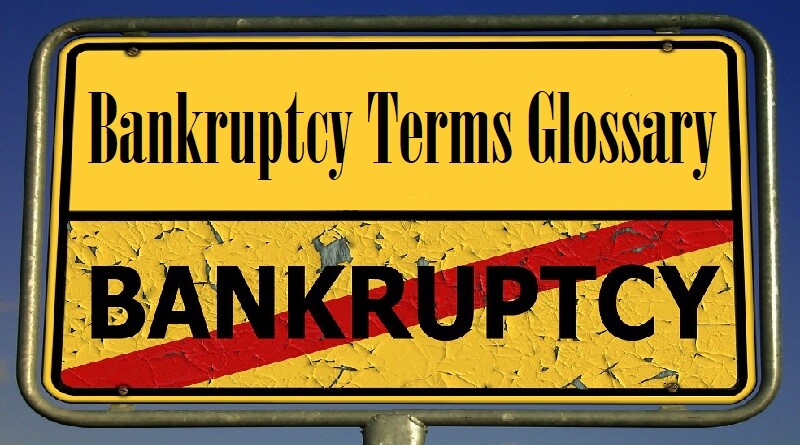 Administrator of consumer proposals – A trustee in bankruptcy or a person appointed by the Superintendent of Bankruptcy to administer consumer proposals. The Provinces of British Columbia, Saskatchewan , Nova Scotia and Prince Edward Island provide this service.


Assessment – Before you make a final decision on making a consumer proposal or on declaring bankruptcy, the administrator of consumer proposals or the trustee, as the case may be, will perform an assessment. The purposes of this assessment are to evaluate your financial situation, to provide you with an explanation of the options available to you and to discuss with you the merits and the consequences of your choice.


Bankrupt – The legal status of a person who declares bankruptcy.


Bankruptcy – A legal process, regulated by the Act, by which you may be discharged from most of your debts. The purpose of the Act is to permit an honest, but unfortunate, debtor to obtain a discharge from his or her debts, subject to reasonable conditions. When you declare bankruptcy, your property is given to a trustee in bankruptcy who then sells it and distributes the money among your creditors. Your unsecured creditors will not be able to take legal steps to recover their debts from you (such as seizing property or garnisheeing wages).


Bankruptcy and Insolvency Act (the Act) – Federal law which regulates bankruptcy and proposal proceedings in Canada . This law falls under the responsibility of the Office of the Superintendent of Bankruptcy at Industry Canada .


Bankruptcy Court – Court in which a judge or registrar will decide on the bankrupt’s application for discharge and other insolvency matters.


Consolidation Order – Available to residents of British Columbia , Alberta , Saskatchewan , Nova Scotia or Prince Edward Island . A Consolidation Order sets out the amount and the times when payments are due to the court. The court will distribute your payments to your creditors. This part of the Bankruptcy and Insolvency Act (Part X: Orderly Payment of Debts) lets you pay off your debts over three years and frees you from creditor harassment and wage garnishment. Unlike bankruptcy, you do not lose your assets.


Consumer proposal – A proposal you can make under the Bankruptcy and Insolvency Act to your creditors to modify your payments, such as reducing the amount of your debts, extending the time you have to pay off the debt, or providing some combination of both.


Co-signers – Your bankruptcy does not cancel the responsibility of anyone who has guaranteed or co-signed a loan on your behalf. For example, if your parent co-signed a loan for you, that parent would be liable to pay the loan in full even if you decide to file for bankruptcy.


Counselling – Should you decide to make a consumer proposal or declare bankruptcy, the Bankruptcy and Insolvency Act requires that counselling be provided to you. This counselling must be given by a counsellor registered with the Office of the Superintendent of Bankruptcy.


Creditor – A person, institution or business to whom money is owed.


Debt consolidation loan – A loan that combines or “consolidates” your debts into one loan. The lender will pay off all your debts and, in return, you make monthly payments to that one lender.


Debtor – A person who receives a loan or an advance of goods and services in exchange for a promise to pay at a later date.


Exempt property – In a bankruptcy, you must assign all your assets to the trustee, except for exempt property (such as basic furniture, tools-of-trade and, under certain circumstances, the goods and services tax credit payments). Exempt property will vary from province to province. Your trustee can tell you what these are.


Insolvent person – One who is unable to meet financial obligations as they become due.


Inspector – Inspectors are appointed by creditors to represent them before the trustee during the administration of proposals and bankruptcies. They are expected to assist the trustee by virtue of their experience and are required to supervise certain aspects of the trustee’s administration.


Mediation – A way of resolving conflict between two or more individuals. In the course of a bankruptcy, the parties involved in a disagreement can agree to work with an impartial and independent person, called a “mediator”, who will help them settle their dispute instead of going to court. Generally, the mediator is an employee from one of the Superintendent of Bankruptcy’s Division Offices. Mediation is more flexible, speedier and less costly than a formal court decision. It allows people affected by the bankruptcy to be directly involved in deciding how their disagreement will be settled. In bankruptcy, mediation is available to resolve two types of disputes: disagreements over the amount of money the bankrupt will pay to the trustee for the benefit of the creditors during the bankruptcy (called surplus income); and disagreements regarding the conditions that the trustee has recommended for a bankrupt’s discharge.


Official Receiver – A federal government employee in the Office of the Superintendent of Bankruptcy and an officer of the court with specific duties under the Bankruptcy and Insolvency Act. The Official Receiver, among other things, accepts the documents that are filed in proposals and bankruptcies, examines bankrupts under oath and chairs meetings of creditors.


Payments and Surplus Income – Immediately after becoming bankrupt, you should no longer be required to make payments to your creditors. However, while you are an undischarged bankrupt, you are required to make payments to your trustee for distribution to your creditors. Remember, you have a duty to inform your trustee of any material change in your financial situation (for example: an income tax refund, a new job, or the birth of a new family member). At the beginning of the bankruptcy, the trustee determines the amount that you will be required to pay. This amount may be adjusted during the administration of your bankruptcy if there is a change in either your total income or personal or family situation. The trustee sets the amount of payment by taking into account your total income, the standards issued by the Superintendent of Bankruptcy, and your personal and family situation.


Secured Creditor – A creditor who has taken some measure to protect themselves and holds a mortgage, pledge, lien or similar instrument on, or against, your property. If they are not paid, they can enforce their claims by recovering the assets on which they hold security.


Superintendent of Bankruptcy – A federally appointed official who oversees the administration of the Bankruptcy and Insolvency Act in Canada.


Trustee in Bankruptcy – A person licensed by the Superintendent of Bankruptcy to administer proposals and bankruptcies. The trustee represents your creditors and is an officer of the court. However, the trustee can give you information and advice about both the proposal and bankruptcy processes and make sure that your rights, as well as those of the creditors, are respected.


Unsecured Creditor – A creditor who does not have any security for the debt owing to them.


Windfalls – Unexpected money, including lottery winnings and inheritances. Windfalls occurring during the period of a bankruptcy must be turned over to the trustee for distribution to your creditors.

Bankruptcy is not a corporate term but it has also become a problem in consumer financing. Try to avoid going into such a financial situation in which you could not pay back your liabilities. There are several ways to get out of this unhealthy financial crisis. e Loan Canada is pleased to offer its Learning Center with a variety of educational articles & comprehensive Terms and Glossaries to help you navigate through the world of personal finance.

Learning Center with a variety of educational articles & a comprehensive glossary of financial terms and abbreviations to help you navigate through the world of Personal Finance.